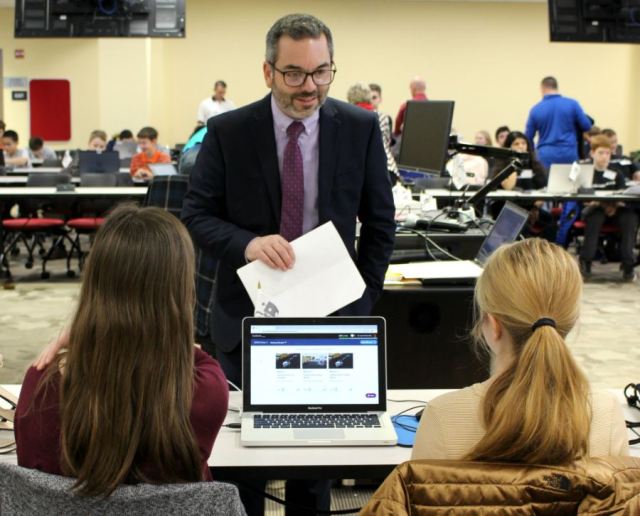 Matt:  For me it was the passion for the work that we do, being passionate about the experiences that schools provide for students and realizing that the best way to maximize that impact is through leading others to join in the cause.  I’ve moved into new opportunities with a greater sphere of influence over the years but I’m still driven by the same passion, believing that the experiences we provide students have the potential to positively impact their futures.

Geoff:  You became a principal.  What kind of preparation did you have for that?

Matt:  I pursued by Masters Degree in Educational Administration and took coursework at two different universities.  Honestly, I think that preparation was insufficient for the demands of the principalship.

What I learned from those experiences and then combining it with the real world experiences is that we really need to find ways to embed coaching models for our principals.  It’s a very demanding position in any school system.  I don’t think that any university can simply provide you the coursework and turn you loose and expect you to be successful.  I think you can get a base of knowledge that you can draw from, but we really need embedded coaching models for our principals to help guide them and navigate them through the VUCA (you know, the volatility, uncertainty, complexity and ambiguity) that our schools face.

We would often say when I was principal and I met with my internal leadership team–we would meet together every Monday morning, and one of the running lines was, “This problem that we’re navigating right now, it wasn’t in the textbook.”  It was sort of our saying, and it’s true.  You have to embed coaching within real experiences and help folks learn to be problem solvers and risk takers and all sorts of things.

Geoff:  What is it that you do that makes you a leader?

Geoff:  Who influenced you in your leadership development?  Who do you pattern yourself after?  Who’s been a model or mentor?

Matt:  As I alluded to earlier, I’ve learned a lot from just about every leader that I have worked with over the years.  Also, through coaching experiences that I’ve had.  I can’t tell you how much I’ve learned from you over the years and more importantly have passed on to those that I lead.  Those are the opportunities that shape you into who you are.

Geoff:  What would you say is your leadership philosophy?

Matt:  It’s servant leadership.  When I talk about servant leadership, I mean sort of the Ken Blanchard way that he framed it in setting a vision, a clear vision, of a future–making a declaration for what we’re moving towards.  Then the servant leadership comes into the implementation:  how we’re going to get there.  Serving others in my mind means removing obstacles and giving each member of the team what they need to be successful.  That’s what I see as my role.

Geoff:  What’s the most important thing you learned about leading?

Matt:  I’m going to give a bifurcated answer because I think there are two and I can’t decide one more than the other.  One is, more than ever, especially in today’s fast-paced environment that we live in, building high performing teams and equipping and empowering them is absolutely essential.  I’ve always believed in building teams.  As a district level leader, it was all about working with principals for them to develop high performing teams in their buildings.  At a state level with six bureaus and fourteen divisions, it’s all about “team” and having teams that are engaged and effective.  So number one is teams.

Number two is adaptability.  I’ve learned now, having walked through several leadership positions, that you can’t just do what you’ve always done.  So when I was a building principal, I couldn’t go be assistant superintendent and lead the exact same way that I did as building principal.  And then the same thing going from one district to another, and then from a district to a state level.  You hold onto the core of who you are—your values and beliefs.  You hold onto your core leadership philosophies, which again in my case is servant leadership.  But you also have to contextualize your skills to be successful.  That means, especially during your first 90 days, to watch and learn when you’re in a new environment.  Then apply your skills to the needs of that system.

Geoff:  What’s one thing you wish you would have known how to do that would have made you a better leader back in the day?

Matt:  As leaders I think we’re always learning.  At this point in my career, I wish I would have known 15 or 20 years ago how important it is not to be afraid to make mistakes.  I think I used to lead a little bit more defensively.  Risk taking is important.  You’re never going to realize audacious dreams and an audacious vision if you’re playing it a little bit too safe.  I think that’s one thing I’ve learned in recent years that I wish I would have learned a little bit earlier.

Geoff:  What are the key skills and abilities that leaders need to have?

Matt:  The first one is being able to engage others in rallying around a declaration of a future state of being—a clear vision for where an organization should go, should move towards.  The energy level to continue to pursue and a persistence to continue to pursue that vision, even when there are daily threats to realizing that vision.  There has to be a resilience to the leader.

As I’ve alluded to a few times, the ability to recruit and develop members of teams and to build teams that are really clear on what outcomes they’re trying to generate as well.  So the skill of team building.

And then, finally, the ability to establish a culture where everyone feels valued for their role in chasing after that vision.

Geoff:  I remember when you started in this position, you were inundated with email, phone calls, and texts.  Then you did something pretty dramatic.  Can you share what you did to change things?

Matt:  What we did to manage the information flow — especially with email — many, many leaders are inundated with responding to external requests.  At the state level, we get hundreds upon hundreds of emails a day.  What we did was we built a system for handling those emails that come in.

I worked with my administrative assistant to begin to help filter and redirect emails.  Then we created some roles on the team to be able to problem solve some emails at different levels of the organization.  What it did was it recouped significant time each day to focus on forward-moving activities as opposed to just being in a reactionary or responsive mode.

In the process, it actually built the capacity of the team because other folks were solving problems and needed to learn and grow to be able to solve some of those problems or to respond to some of the issues that were coming through.  We built that system, and it’s decreased the amount of time each day spent just checking and responding to emails.

Geoff:  I also seem to remember you made a powerful declaration to your team about 7:00 to 7:00.

Matt:  Two other things.  One on email and then 7:00 to 7:00, that you mentioned just now. The other thing we did was, I realized that a significant number of emails were being generated by our team in the Office of Elementary and Secondary Education.  So I can’t control the emails that come from the outside, so we built a system for that.  But for our internal leaders, we made a commitment that whenever possible we would pick up the phone and call.  Actually, the ideal would be to walk to one another’s office and engage in two-way communication, face-to-face.  And when that wasn’t possible, we would engage each other with phone calls.  And if that wasn’t possible, we would send each other text messages to elevate important issues.  We would move away from email as the mechanism.  That helped decrease volume right there and build greater teamwork and communication.

And then the other thing that we did aside from all of that is setting boundaries and talking about setting boundaries.  I made it clear to the team a few years ago that 7:00 in the morning until 7:00 in the evening were the times that we would be accessible.  After 7:00 in the evening, that time was for emergencies only.  The same with the weekends—after 7:00 on Fridays, unless there was an emergency, weekend time would not be normal business activities.  For the most part, we live up to that.  There’re still folks there, even a couple years in, who are still making the transition to learn to manage some of that on the off hours.  But I think we’ve done well there.

Geoff:  What benefits did you get from that last rule?

Matt:  It allows you to show up as your best “you” every day.  I’m a firm believer that there are diminishing returns when you hit a certain point in the number of hours that you put into work.  So when you get beyond 65 or 70 hours a week, I think it takes a physical toll and it takes an emotional toll.

Quite frankly I think there’s been some research on this:  performance actually deteriorates when you’re burning the candle at both ends.  You have more breakdowns and the quality of your work deteriorates.  Setting those boundaries makes you physically, mentally, and spiritually more well, and also increases your productivity.

Geoff:  And of course it gives your direct reports permission to do the same.

Matt:  It gives direct reports permission to do the same.  Some continue to need more pushes than others in that direction, but you bet.

In Part 4 of our conversation with Matt, we’ll hear Matt’s thoughts on how leaders can develop competencies, how he deals with the stress of a high stakes leadership job within a highly political landscape, and his thoughts on what contributes to the “busyness” epidemic.