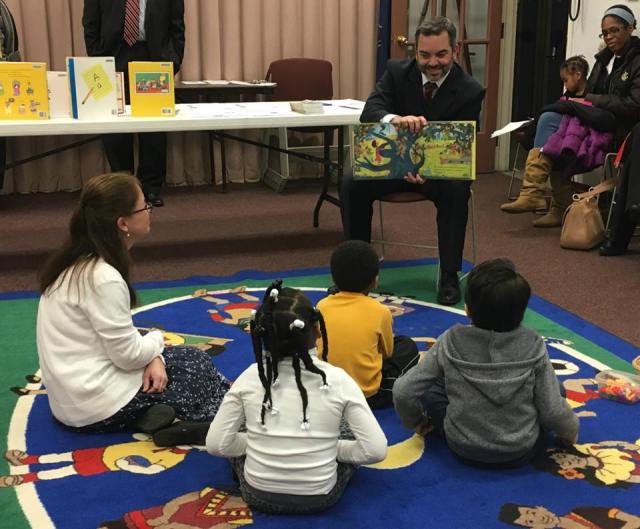 Matt:  I told my wife when I first got into education that all I ever wanted to be was a teacher, that I didn’t have greater aspirations than that.  And then one door after another continued to open.

The door to being Deputy Secretary opened when Secretary Pedro Rivera came into his position.  He is someone I had worked together with in Lancaster, and I knew that he had a moral purpose about education—he deeply cared about students and cared about changing outcomes.  That’s how he’s wired, and he’s authentic in that way.  When that door opened up, it was. . . you spend over 20 years watching what happens at a state level and believing that things should be different…So when that door opens up, I think you have a responsibility to take advantage of the opportunity and try to make things better.

Geoff:  You didn’t make the decision lightly, though.

I’m also a relational leader, and so I fed off of that energy and those relationships with students and families and teachers.  You’re always together and, again, in Lancaster we talked about being a family and in Wyomissing we talked about being a family.  So leaving that to go to a place like working in state government where folks don’t quickly associate state government with operating like a family, it wasn’t something that I took lightly.

But what a privilege it is.  Who gets to be Deputy Secretary and gets to make decisions that impact 1.74 million students across more than 3,000 schools in the Commonwealth?  It’s a humbling opportunity.

Geoff:  You told me when you made the decision that you chose to accept the position as Deputy Secretary of Education because you wanted to address the unanticipated consequences of many of the decisions that came from the Department of Education.  Has that purpose changed in any way?  If so, what did you learn, and what is it now?

Matt:  Unintended consequences remain a key discussion point in the Department.  Helping to navigate decision makers through unintended consequences is still a really key aspect of what we do.  I think what I’ve learned over the last four-plus years in Harrisburg is that most decision makers, policy makers, law makers, advocates, and others that influence policy almost universally are well-intended.  But it’s our job as former educators to help folks actualize their goals and intentions, but doing so in ways that are thoughtful and responsible and take into consideration the complexities of schools and communities.

Matt:  Right, now there are two great challenges that come to mind.  One is in the area of resources.  It’s an issue across the country but particularly in Pennsylvania where there’s such a disparity between the resources in some districts compared to the resources in other districts.  The way that the system is designed, over the years we’ve just seen a greater burden placed on the system with less resources to accomplish them.  Leaders are being forced to be very thoughtful and innovative and disruptive in a lot of ways in terms of how they lead because schools can’t, and really shouldn’t, just continue to do what they’ve always done.  The resource challenges are forcing leaders and school boards to re-evaluate.  I think the resource challenges are number one, and we see that around the state.

The second one, equally challenging, is effectively meeting the various needs that students bring to classrooms.  We’re seeing more and more students that have had traumatic experiences in their lives. Additionally, we’re seeing the impact of social media and screen time on the ways in which young people socialize.  We’re also seeing communities less cohesive in some ways.  All of this plays into students and families that exhibit greater needs than even just ten years ago.  It’s a challenge that schools have to face and it’s our responsibility at the state to provide the supports and create the conditions for successful innovation in this space.

Geoff:  I once heard a colleague say that public education was designed in the nineteenth century, perfected in the twentieth, to address twenty-first century problems.

Matt:  Absolutely.  That industrial model—we’re still fighting through the industrial model.  It’s a great observation, Geoff.  This is what we’ve been trying to do, certainly our administration over the past four years, is create the conditions that allow districts to take risks and innovate.

We’re preparing students for a world that looks very different than the world in which most of us grew up.  We literally are preparing students for jobs that don’t yet exist.  Ten years ago, we were saying that we were preparing students for jobs that don’t yet exist, and it happened.  Whether it’s Uber and Lyft drivers, whether it’s social media advisors and companies—there are entire sectors of the economy and the workforce now that didn’t exist ten years ago.  So I think there’s a greater realization now in schools that we have to be more nimble, we have to be responsive in our teaching, and learning has to reflect the skills that students are going to need now as we’re well into the twenty-first century.

Geoff:  If you could magically have everyone in the Commonwealth know one thing about public education, what would it be?

Matt:  For those who aren’t close to public education to realize that we are preparing students for a world that has drastically changed.  For example, right now in Pennsylvania, we have over 300,000 jobs that require some skill and proficiency in science, technology, engineering, math, and the like.

Matt:  Exactly.  I was appropriately named for my position.

In the STEM fields, there’re over 300,000 jobs in Pennsylvania right now that require STEM skills and in industries that historically you wouldn’t think about.  It’s neat at the state level learning what’s happening around the Commonwealth.

A lot of it is about mental constructs that you bring to the work.  And the same in agriculture.  It’s unbelievable.  A lot of the machinery that you see on the farms is self-programmed with GPS to navigate and irrigate fields and do all sorts of things that I don’t fully understand.  So schools have to change and adapt if we’re going to serve our kids well.  That is something that the general public needs to understand.

Geoff:  What can you tell me about the kinds of people you work with?  What do they all have in common?

Matt:  What the individuals I work with have in common is they all bring unique gifts, talents, and strengths to the work.  There are also many things that they don’t have in common.  Learning to play to folks’ strengths—we have a lot of smart people, we have a lot of hardworking people on the team, there are some with political savvy, there are some with technical savvy.  Harnessing that is a key to what we do.

Geoff:  What would you say are the greatest challenges facing school district leaders today?

Matt:  We’ve hit on some of these.  I think among the greatest challenges facing school district leaders, especially in Pennsylvania, is closing achievement gaps.  For a lot of reasons, we have some groups of students that perform, not just academically but even in terms of other measures, significantly below other groups of students.  Those gaps are a problem. In Pennsylvania we have some of the greatest achievement gaps among our white and Asian students when compared to our African American and Hispanic students, students of color, than any state in the nation.  Our leaders need to find ways to rally their entire communities to close those gaps and ensure that every student in every classroom has the same opportunities and is meeting with success.

Geoff:  Over the last 20 years I’ve witnessed a reduction in the number of people who want to go into school leadership and, even recently, the number of kids who go into teaching.  How is that impacting the Commonwealth?

Matt:  We’ve had a roughly a 60% reduction in the number of certified teachers coming out of our institutions of higher education over the past five years.  I don’t know what the numbers are on leadership, but that all cascades because it’s your teachers that become your future leaders.  I think for all the challenges we talked about before, when you talk about resources and you talk about meeting needs, this is an area that we’re continuing to focus on.

In any school system, the experiences the students have are going to be most influenced by the principals in their building, because the principals are going to set the tone for their teams of teachers.  If you have a highly effective principal in a building, even with resource challenges and all the other challenges, if you have a highly effective principal as a building leader, those students are going to have a great likelihood of success.  We’ve got to do a better job of developing leaders—at a state and at local levels.

Geoff:  What’s one piece of advice that you’d give to every school district leader?

Matt will be speaking about “Jazz Leadership in a Dynamic World” at “Meeting (extra)Ordinary Leaders Conference” October 29 at the Ware Center in Lancaster.