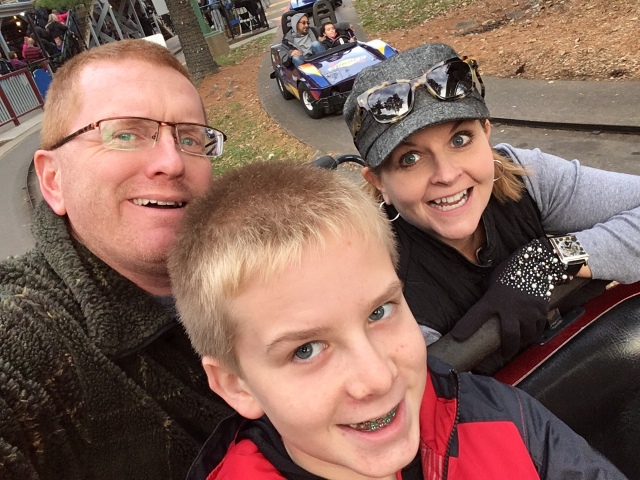 Geoff:  How would you describe your leadership philosophy?  What do you believe about leadership?

We might talk about personal things, we might talk about leadership things, we might talk about specific things that are happening in their buildings.  But I think that time is very precious.  And it’s not only a learning time for them, it’s a huge learning time for me.  I believe that leaders must continue to grow.  If you’re not growing, then you’re dead on the vine.  That means speaking with others who have other kinds of experience, maybe having a coach, reading current literature.  I believe you constantly have to be making sure that you’re still able to live your bottom line, your platform of beliefs—that you’re not compromising those things.

April:  I do.  But I also see people who look at the job that I do, amongst my colleagues, very differently than I do.  I see people who are a lot like that principal I told you about who believe that their job is a managerial one and that their job is solely to insure the fiscal health of a school district and to make sure that things are running smoothly.  And that might be okay in some school districts.  To me it’s way more than that.

Geoff:  So recently your district has experienced some profound tragedies.  How were you and your team able to navigate those tragedies and what did you learn from each experience?

April:  We’ve talked a lot about relationships and how I see that as the basis for good leadership.  Had we not spent time studying leadership and trust and really spending time together as what we call the Warwick Family, I’m not sure that we would have survived what happened as a cohesive team.

Geoff:  Maybe we should pause and tell people what happened.

April:  At the end of October there was a horrific car accident in front of our high school in which two students lost their lives and one was critically injured, although he is back to school at this point.  And a few weeks later one of our students committed suicide on our campus on a Saturday morning.  On the day of the accident, I was about to board a plane to return from a conference and the team started to text me to let me know that there had been accident, but there wasn’t a lot of information at the time.  But the entire team flew into action.  And many of them functioned as first responders at the accident scene, helped to identify the students, called parents, kept the crowd back—just really stepped into roles that are not what is typically expected of a school administrator.  And I could not be more proud of them for doing those things.  They did that because at the core of what we do is that we love kids.

I arrived several hours later and as a team we stayed all night.  We facilitated a vigil for students.  The next day we opened our school for counselors and therapy dogs and any students or families that needed to come and talk.  And then we prepared for the next week.  On Sunday we allowed any staff member who needed to come to talk to someone.  Then throughout the week we had all sorts of support in place.  And we continue to have support in place today, six months later for all of that.  The same sorts of things happened after the young woman took her life.

Our team is just an amazing group of professionals.  Again, at the core of who they are is that they love kids.  One of the things that has become very important to us is that we’ve all become very close to each of the families of the students who passed.  And we’re going to continue to walk with them even into the future because they needed that kind of support.  And sitting in the hospital, besides their families, and in some cases there wasn’t a lot of family, there really wasn’t much support at all.  So when I hear people say, “Well that shouldn’t be the school district’s responsibility,” I vehemently disagree.  Our responsibility is to step in and support students and families whatever that looks like.

Geoff:  So let’s talk a little bit about vision.  You know that I believe that leadership starts with vision—establishing a compelling, powerful vision that cascades throughout the organization, that aligns all the activities with it.  What’s your vision for Warwick?

April:  Our vision for Warwick is that we’re going to equip our student with knowledge, skills, and values to be successful in today’s world.  And that looks like a lot of different things.

In my time at Warwick, when I first started the Board asked me to create a dream list of things I’d like to see accomplished.  The first thing on the list was full-day kindergarten, which when I first came was not possible because we didn’t have space.  But over time our enrollment has been declining and, when we knew that we had enough classrooms, we were able to make it happen and now for three years we’ve been full-day kindergarten for every single student.  And we wanted to do that because we know that every investment that we make in those early ages will pay dividends as students go up through school.

The second thing on the list was that every student would have some sort of a device:  a one-to-one initiative.  And pretty much every other local school district has already gone one-to-one.  For me, I wanted to be sure that our teachers had as much information and skills as possible before we put devices in people’s hands because just like in any other endeavor, there are about 20% of people who are absolutely resistant to this idea.  But we know, because we have taken our staff out to tour local businesses, that no one is doing work today without some sort of a device.  And so we’ve been working now up to the place where next year every child will have a device that is solely theirs to use.  Some of them will stay in school all day for the younger grades and some kids will be able to take them home.  Right now half of the students have a device and next year that will be fully implemented.  That was a huge vision for me in order to equip students with skills with devices so that when they graduate they’re able to use those.

The last thing on the list is that, when I began at Warwick—in 2009, the economy was not the greatest and the district had just embarked on looking at completing a master plan project which was turfing a football field and a concourse field house with all these bells and whistles.  And I remember sitting at the Board meeting where I was being named Superintendent, and the room was packed with angry people who felt that this was frivolous spending on behalf of the school district.  So that fieldhouse completion remained at the bottom of the dream list but not necessarily a priority. Now that we’re at a place where we need to do renovations on our high school, particularly the gym area which hasn’t been touched for about 40 years, we’ve looked at that project again in order to create safe and up-to-date facilities for locker rooms and training rooms.  And we’re actually in such a better financial place than we were 10 years ago, that we’re able to do that without raising taxes.

So the vision that we’ve had to provide students with knowledge, skills, and values, kind of touches on those dreams that we looked at.  Now we’re currently building our new dream list, which is under construction:  things like pre-K, lots of different ideas about maybe mass customized learning, some other ideas that were percolating about what would make the most sense to equip students for the future.

Geoff:  Where do you get your energy to do all this?

April:  I think I’m going to start with my faith.  I get up really early in the morning and I get to school somewhere between 5:30 and 5:45 and I try to get at least half of my daily allotment of steps in.  And while I’m walking, I’m praying.  Tonight’s a Board meeting, so I spent time praying in the Board room over the seats of the Board members and over the seats of the audience, in case there’s anybody coming tonight.  I get a lot of energy from that.  A little devotion each morning.  Over the last few years I’ve paid a lot more attention to my health because it’s very easy in these roles where you’re on 24/7 to eat poorly and to not get enough rest and to not exercise.  And so I’ve taken that very seriously.  And the ten to twelve thousand steps a day and watching my calories has really made a difference for me and sort of given me a new energy to do what I do.

April:  I think I need to go back to love people where they are.  Everybody has a story, everybody is carrying burdens, everyone has a lens through which they see things, and in order for us to be able to work together towards something, we have to understand that about each other.

Geoff:  What’s one thing you wish you knew that would make you a better leader?

April:  We don’t always have to be perfect.  It’s okay to make mistakes—mistakes are how we learn.  I’ve been saying a lot that Warwick is a learning institution not just for kids.  We have to be able to give each other the grace to make mistakes so that we can grow.

Next post, we’ll wrap-up our interview with (extra)Ordinary Leader, April Hershey and what she believes about culture, learning, and the persona and emotional impact of leadership . 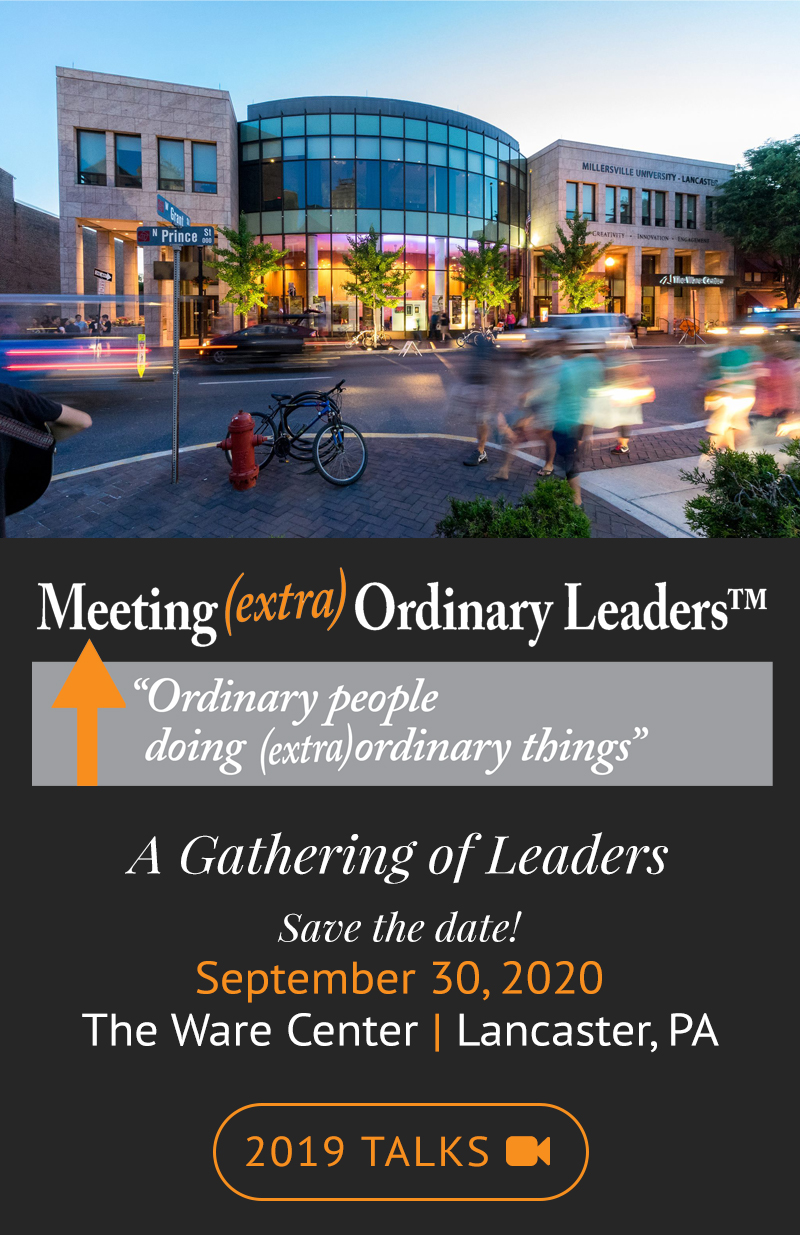